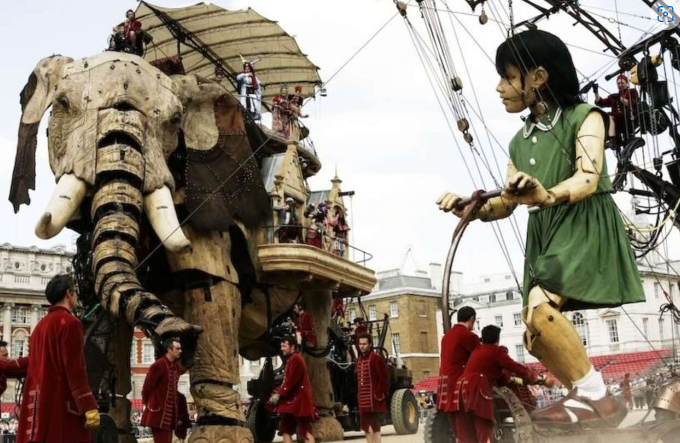 Artichoke, whom I encountered while in London, was due to the London Lumiere event. Light events are held throughout London, hosted by the Art Council and the Artichoke Trust in England. So it is an organization that I found out after checking. Artichoke, also known as Artichoke Trust, is a British company based in London and a charity organization that hosts arts and events. It was founded in 2020 by Helen Marridge and Nicky Webb.

The Luminaries of London

Throughout the city of London, sculptures and productions are made of light

The message is that London’s winter streets are changing because of Lumini
Artichoke is good at working on a large scale on the streets, especially in unusual places such as public places and quiet countryside. There are not only works in theaters or art galleries, but they are planned for events to show to many people. In April 2006, a free theater called Sultan’s Elephant was built and a million people attended over four days. Artichoke is a company created by two women, but the power of their work is big and bold.

The content of Sultan’s Elephant is simple. A huge girl takes off in a rocket and a police officer sprays the last big water, reminding the revolution in Britain as the elephant walks in the form of a large marionette. It is a simple content and play, but it is an unrivaled part of the ability to convey its meaning and create a large-scale show.

Sultan’s Elephant on the scene

A Girl Riding a Double-Story Bus, a Symbol of London
It was the biggest free event held in London at the time as an outdoor theater performance. It was performed for more than 4 days, but the preparation period was 7 years. In particular, it is said that persuasion and connection work by public institutions were the most difficult, and that is because the road from Trafalgar Square to St. James’ Park and HORSE GUARD in London was the most crowded area.

The giant machine spider held in Liverpool in 2008 is also a city festival in conjunction with La Machine, a French performing arts company, and this performance is also by Artichoke.

100th Anniversary of Women’s Suffrage
Artichoke started out as a theater producer, but now he doesn’t consider them just a theater producer. It was covered by a large project company and an art organization that conducts cultural trends and social movements. It can be said that the journey started to be shown at the outdoor concert hall is a footstep that creates the movement of a large society that is created with technicians and all government offices.

I wanted such an art organization to come out in Korea and I wanted to make it, but I thought it was impossible in Korea at the thought of consulting with government offices, but I want to make it continuously in the future in terms of helping society.