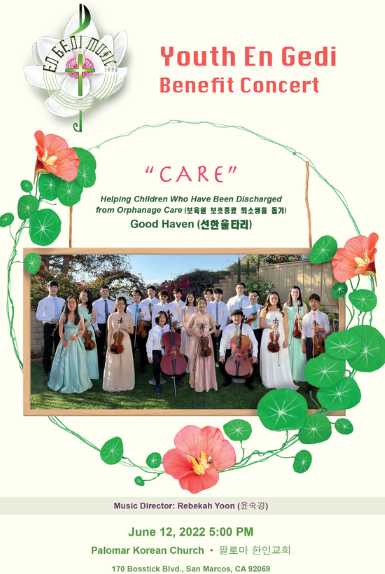 At the charity concert, which will be held under the theme of “CARE,” about 20 people, including members of “Youth N Geddy” and graduates, will perform various music such as classical music, folk songs, folk songs, and hymns.

Youth N.G.D., which has donated donations and profits collected annually through charity concerts over the past decade to charities such as Korea’s Baby Box, will support the Good Fence, which is helping Korean nursery school evaders.

“Good Fence” is active to provide professional and comprehensive services for young people in difficult circumstances, such as youth protected and raised in child care facilities being terminated and driven to society without economic and emotional and economic support.

Youth N.G.D. was founded in 2005 by Yoon Sook-kyung (Rebeca), a musician, and has been leading the youth string ensemble in the Korean community in San Diego. Anyone can participate in the performance, and admission is free, but donations are received from those who want it.